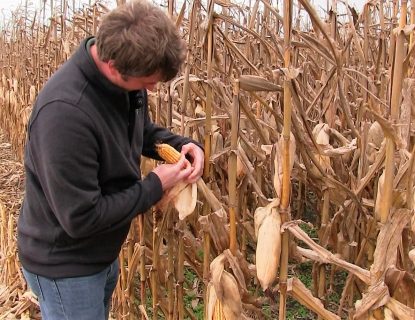 All of the 2019 crop year buzz words and terms apply in the eastern half of Indiana as we head for harvest. Compaction, standability, nitrogen deficiency, early frost and variability continue to be concerns, according to Seed Consultants agronomist Matt Hutcheson. He says the overriding theme for yield potential is variability.

“Whether it’s from field to field or within each field, this time of year it might be an out of sight out of mind kind of thing and things look pretty good from the road, but there’s areas and pockets in fields where we may have below average or no yields depending on what kind of water ponding we had or saturated soils,” he told HAT.

Significant compaction this year has compromised root systems, and Hutcheson is among the many who are greatly concerned about the corn crop standing all the way to harvest.

“We get closer to fall and we start to see storms or high wind events, especially in combination with wet weather where the soil gets saturated again, the concern would be with those windy storm events we could see some root lodging, some plants go down because we just don’t have a great root system out there on a lot of these plants.”

Getting the corn crop harvested as soon as possible will be important again this year, and Hutcheson suggests mid-20 percent moisture levels as harvest target levels.

“With late planting and some of the areas where we’ve had cooler weather here recently, we’re just not accumulating a lot of heat units to rush the crop along, so I think we’re going to be looking at some higher moistures in corn fields. We can’t expect the corn to dry down in the field, and I don’t think we want to leave it out there long enough to try to get it down into the high teens just with Mother Nature alone.”

Higher moisture corn will mean more dry down costs, but it could be the better alternative.