Hoosier Farmers Get a Bit More from Senate Debate, but Not Much

Well, Hoosier Farmers, you got a little bit more than a minute and fifteen seconds during Tuesday night’s final Indiana Senate Debate. We received responses from many of you saying you had submitted an agriculture question to the Debate Commission; however, there were no ag specific questions asked. And much of what was discussed by the candidates was the same as the last debate. Both wanting to help Hoosier farmers, in different ways, Incumbent Senator Democrat Joe Donnelly again was banging the drum for ethanol and Libertarian Lucy Brenton was again banging the drum for hemp. 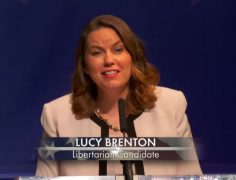 “There are businesses in Indiana right now that are importing (hemp fiber). One single business in Elkhart is importing 100,000 pounds of hemp fiber to make their products every single week. Why are they not walking across the street and writing the check to a Hoosier farmer?”

The conversation of ethanol and hemp came up during another question about climate change. Republican Mike Braun said it comes down to taking care of Mother Earth. He said he has lived that and done it in the real world being a tree farmer in his hometown. 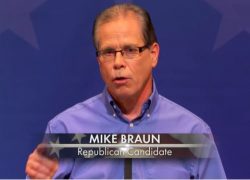 “I’ve been somebody there that is a conservationist. I think our own party, if you’re conservative I think you ought to be a conservationist. And I’ll always be attentive to it and I’m going to know the things you can do because I’ve done it for all the years I’ve been back in my hometown.”

When asked about how to best alleviate hunger and support anti-hunger programs, Donnelly talked about his standing on the Senate Ag Committee and the farm bill. 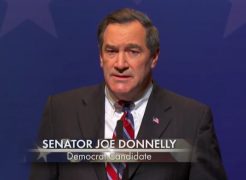 Brenton and Braun both said that the issue shouldn’t be reliant on the federal government, instead being a state rights issue. Donnelly replied,