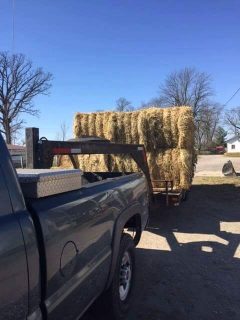 Several Indiana Farm Bureau members are loading up trailers and making the 1,600-mile trip to Kansas to deliver donated hay to ranchers who have a desperate need for feed for their livestock. Ranchers and farmers in Kansas and other parts of the country have experienced massive devastation as wildfires, fueled by low humidity and high winds, have destroyed more than 650,000 acres of pasture and rangeland recently – killing livestock and the grazing land needed to feed the livestock that remain. 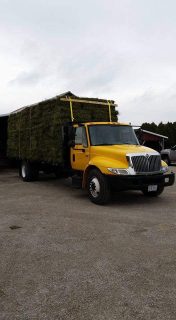 “I was reading on social media about the devastation in Kansas and elsewhere and how the farmers and ranchers were struggling to feed their livestock because their pastures burned in the wildfires,” explained Canary. “I had to do something and this seems like the perfect way to help.”

The hay, more than 20 tons of it, was donated by Phil and Cindy Ramsey of Shelby County. “I saw that John was asking for volunteers to donate hay. Cindy and I had some to spare so we thought someone could get some good out of it,” Ramsey explained.

Ashland Feed and Seed is serving as the main collection point in Kansas for all the hay being donated by farmers in Indiana and throughout the country. Several truckloads from Ohio are also making their way west.