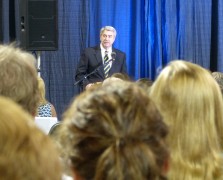 A record 92 families were honored last week at the annual Hoosier Homestead Awards ceremony, recognizing their commitment to Indiana agriculture for 100, 150, and 200 years. Director Ted McKinney from the Indiana State Department of Ag loves the twice a year events, and he says the award brings out a range of emotions.

“Mostly it’s celebratory because people are recognizing some achievement, again 100, 150, or 200. But there are also some tears shed because a matriarch or a patriarch are no longer with them and they may have wanted to see this. And clearly,” McKinney added, “there’s always the remembrance of the sacrifice of tough times. the Great Depression is often times cited, sometimes the early 1980’s. I hope the period that we’re in now isn’t one of those that we look back upon.” 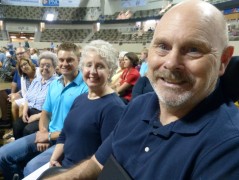 “Basically it’s been passed down from my grandfather to my dad to me, and it’s just a real honor to be a steward of this land and see that hopefully we’ll pass on to the next generation.”

He told HAT the operation today in the northeast corner of Indiana is “all grain, some hay and a little bit of hardwood, timber.”

Joining Conrad were his wife Betty, son Jack, sister Joyce, and brother and sister in law Joel and Linda Conrad. With the large number of attendees, the ceremony was moved to the coliseum at the fairgrounds. In Indiana’s bicentennial year, four farms were honored for 200 continuous years in the family, two from Posey County, and one each from Fayette and Harrison County.

“Agriculture has been our state’s calling card for the past 200 years, and we owe that to the tremendous contributions made by Indiana’s farming families. Their hard work, innovation and collaboration move our state forward each and every day,” said Lt. Governor Eric Holcomb, also the Indiana Secretary of Agriculture and Rural Development.

Hoosier Homestead awards are presented to farms owned by the same family for more than 100 consecutive years. The farm must total more than 20 acres or produce more than $1000 of agricultural products per year.

There are now more than 5,000 Hoosier Homestead farms for a program in its 40th year and administered by ISDA. The other ceremony is held in March at the Indiana Statehouse.