The National Pork Board has announced its first-ever America’s Pig Farmer of the Year Award, and a Hoosier producer has won.  Keith Schoettmer, from Tipton, is a well-known name in Indiana pork circles, having served in several leadership positions with Indiana Pork. Now the rest of the world will know him better as he has been named the first Pig Farmer of the Year.

Schoettmer and his wife Darla began Prime Pork in 1987. He describes his operation as rather typical, “We have about 1050 sows and are a farrow to finish operation with a feed mill and mostly all on one location. We are humbled and honored by this award.” He started as a first generation, pork producer with 450 sows and has grown the operation over the years. 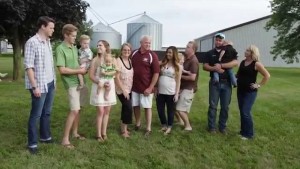 He hopes to use this award as an opportunity to educate the public, “We are really looking forward to visiting with people about pig farming in America. We want to tell them how producers take care of their stock. We want to tell them that there are thousands of producers who are doing the right thing every day.” He said he wants to keep his message simple, “Here on the farm we care about raising these animals, about taking care of the environment. We are about food safety and about the welfare of the animals. We do this every day.  It is our job, it is our passion.”

The America’s Pig Farmer of the Year Award is designed to recognize a pig farmer who excels at raising pigs using the We Care ethical principles and connects with today’s consumers about how pork is produced. “We are pleased to have Keith represent America’s pig farmers, and we look forward to the dialog he will create as he travels around the country,” said Derrick Sleezer, National Pork Board president and pig farmer from Cherokee, Iowa. “It’s important that we connect with today’s consumers about how we raise their food in an ethical and transparent way. Keith’s interest in sharing his farm’s story – and putting a face on today’s pig farming – will help us reach this goal.”

Schoettmer was selected as the first winner of America’s Pig Farmer of the Year after passing a third-party audit of on-farm practices and also going through a series of written and oral interviews conducted by subject-matter experts. He has achieved excellence in all aspects of pig farming, including animal care, environmental stewardship, employee work environment, and outstanding community service.

The panel of expert judges met in early September with the four finalists. The panel included Dr. Robin Ganzert, president and CEO of the American Humane Association; Carlos Saviani, vice president of the World Wildlife Fund’s (WWF) U.S. food team; Mitzi Dulan, a registered dietitian and a nationally recognized nutrition and wellness expert to the Kansas City Royals; Chris Soules, a farmer from Arlington, Iowa, and a television star from The Bachelor and Dancing with the Stars; and Dr. Jodi Sterle, an associate professor of animal science at Iowa State University and a nationally known youth advisor in livestock exhibition.

As a judging panel member, Ganzert said, “Today, more than ever, it is important not only to point out where progress is needed, but to recognize when we get it right. The farmers I met with are working to give America’s families food that is safe, affordable, abundant, and in line with their values.”