A House subcommittee hearing in Washington on Thursday focused on the connection between farm policy and food prices and had a distinctly Indiana flavor. Chaired by Hoosier Congresswoman Jackie Walorski, the panel of witnesses included Dr. Jason Henderson head of the Purdue Extension program. He testified that the new, market-oriented, farm policy established in the last Farm Bill is making a difference during the current downturn in the U.S. ag economy, “Unlike the farm crisis of the 1980s where farm programs focused on price controls and supply management that often caused sharp spikes in retail food prices, the current crop insurance program helps keep food price stable.”

Henderson defended the use of crop insurance subsidies saying it helps taxpayers by keeping food prices more stable, “While taxpayer dollars are used to subsidize a part of crop insurance premiums, if that funding was taken away, it would cost consumers over $2 billion in lost economic value.”

Dr. Henderson said, while lower commodity prices are having an impact of farm families, they are also having an impact on rural economies, “Declining farm profits cast a ripple effect on the rural consumer. Farm capital spending has declined, and farmers are spending less on main street.” He noted that, during the 1980s, rural poverty rates increased as the farm crisis deepened. He expects that to the case in the current downturn. 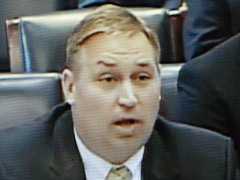 In short, he said farm policy provides stability to the farm economy, “and that will mean steady or even lower food prices as a result of less uncertainty in the food production system.”  Dr. Henderson also defended the use of biotechnology in food production  and assured lawmakers that the US food supply is safe.