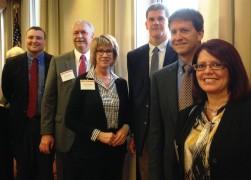 The Coalition for Safe and Affordable Food is on the ground in Washington DC for their October GMO fly-in to meet with senators and promote introduction of the House bill that passed in July. Thirteen Hoosiers are part of the delegation, representing agri-business, Indiana corn and soybean organizations, and Indiana Farm Bureau. Farm Bureau’s Kyle Cline tells HAT the push is to get the legislation introduced in the Senate.

The coalition will be looking for Democrat sponsorship of the bill, and the Indiana delegation will meet their senators, Republican Dan Coats and Democrat Joe Donnelly.

“We feel that we’re in a good place so far with them,” Cline said. “We are here to solidify that support but the early signals have us feeling good. There is still a lot of work to be done, and a lot of other work to be done when you look at other vital states where it’s urgent that we are able to bring some of those folks on board.”

Cline says time is of the essence for a national law because state labeling laws would create consumer confusion and added food expense for each household.

“For example in Vermont, that law will go into effect next summer, so it’s really important that we are able to preempt that effort and that we’re able to come up with a common sense national GMO labeling system, a voluntary system for labeling food, so that we can avoid the unnecessary increase in food costs, as well as ensuring that this vital biotechnology is available for farmers in the future.”