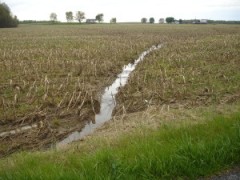 The House next week may take up a resolution of disapproval of the Waters of the U.S. (WOTUS) rule. The resolution, introduced by Sen. Joni Ernst, R-Iowa, disapproves of the WOTUS rule under the Congressional Review Act. It passed the Senate in November by a vote of 53-44. The WOTUS regulation was proposed in April 2014 by the U.S. Environmental Protection Agency and the U.S. Army Corps of Engineers to clarify the agencies’ authority under the Clean Water Act over various waters. That jurisdiction – based on several U.S. Supreme Court decisions – included “navigable” waters and waters with a significant hydrologic connection to navigable waters. The rule broadened that to include, among other water bodies, upstream waters and intermittent and ephemeral streams such as the kind farmers use for drainage and irrigation. It also encompassed lands adjacent to such waters. A federal appeals court temporarily halted implementation of the rule, which took effect Aug. 28, 2015. NPPC and other agricultural organizations in a lawsuit against the WOTUS rule filed in July alleged that EPA engaged in an advocacy campaign during the comment period, a violation of the federal Administrative Procedures Act. The House has voted multiple times to block the regulation.