How Many Corn Acres Will We Need in 2015 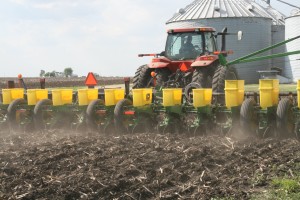 While farmers are harvesting the 2014 crop, economists are looking ahead to how many acres will need to be planted in 2015.   The calculations are complicated and continually evolving, but possible to do. One way to approach the question of how many corn acres are needed in 2015 is to determine the combination of production, consumption, and year-ending stocks that would result in a 2015-16 marketing year average farm price closer to the cost of production. That’s estimated to be in the low $4.00 range (assuming trend yields) in much of the Corn Belt and requires a stocks to use ratio (a combination of all the factors just listed) of about twelve percent says University of Illinois Ag Economist Darrel Good. “We would need to harvest about 60.5 million acres of corn to achieve this we would need to plant about 88 million acres which is about 2 million less than we planted this year,” he stated. Assuming trend line yields, this would be about the same number US growers planted in 2010. This year, US corn farmers planted over 90 million acres.

The problem is, if we cut corn planting, this will likely result in increased wheat and soybean acreage, which will put price pressure on those commodities. Good says right now there isn’t any real call for more bushels of either of those crops, “U.S. wheat stocks are expected to increase during the current marketing year, and a trend yield in 2015 would result in a larger crop than produced this year with no increase in acreage.  A trend soybean yield in 2015 would result in a smaller crop than produced this year, but production would still exceed the projection of use during the current marketing year.”

Good predicts we see a small decline in total planted acres in 2015. This may be the case in some marginal areas, but is not likely here in the heart of the Corn Belt. This means the only hope for corn prices to move above the cost of production in 2015 is for a dramatic increase in demand or a weather event that would cut production.