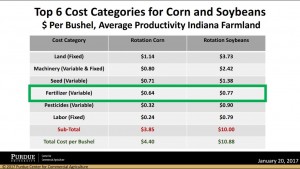 Fine tuning your production costs for the 2017 season is getting a lot of attention this winter, and a new resource from Purdue University focuses on the fertility aspect of those costs. Fertilizer is a variable cost that Purdue specialists believe can still be managed just a little bit better, even though farmers have made great inroads in recent years. 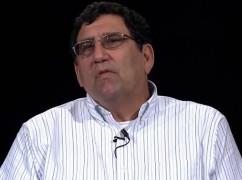 “The first thing to do would be to maximize the efficiency of the nitrogen application so that more of it is used by the plant and less by the environment,” he explained. “In our environment first and foremost is to apply as much of the total N demand of the crop in-season. That exposes it to less weather, you have less opportunity for it to be lost, yet it’s there for the plant to use early in the growth period. We’d suggest sometime between about V3 and V7 which is three visible collars to seven visible collars, and probably about six inches tall to about knee high, or twelve to eighteen inches tall.”

Camberato says you also need to control when you apply anhydrous ammonia. He says fall is not a great idea because you can lose a lot of it. The rule of thumb for spring application is the later the better, but “if it’s applied close to planting and not very deep, it can affect the germination and seedling establishment. So the most important aspect is to have it 7-8 inches deep or use GPS and RTK to place it between the rows rather than near the rows.”

He adds a good time for application is 10-14 days before planting the corn crop. Maximizing P and K are also discussed in the online webinar, produced by the Purdue Center for Commercial Agriculture. Watch it here.