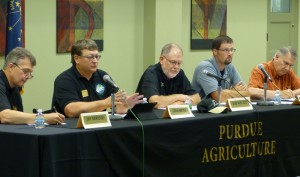 USDA’s August crop report says big crops, maybe records, are coming, nationally and here in Indiana. Hoosier farmers are projected to average corn yields of 187 bushels per acre, with a U.S. average at 175.1. Soybeans are estimated at 55 bushels per acre in the state, outpacing a national 48.9 bushels per acre.

So, crops are big and that will continue to weigh on prices. But Purdue ag economist Chris Hurt says here in Indiana there can be some optimism.

“The silver lining probably for Indiana is that we’re going to see improvement in incomes for crop farms. Now most are going to immediately assume that’s because the yields are high, but the other problem this year is prices are probably going to be pretty low. So nationally we see an 11% increase in the size of production, but a 13% drop in price. this means revenue on an average across the United States would be lower. The difference for Indiana is that we had poor yields on corn last year. A hundred-fifty bushels and now we bounce back to 187.”

He said production is up so much, outpacing the drop in prices, that revenues will be higher than a year ago.

“Across the state that’s about $650 million more revenue this year on the corn and soybean crop. Incomes we think from the crop sector have been very low, maybe around $600 million, so we could almost double what’s been very tiny incomes from the cropping sector. Now this isn’t back to real strong returns,” Hurt added, “but we think it’s going to feel a little better on crop farms.”

Of course, that’s crop farms that really do realize the excellent production potential. 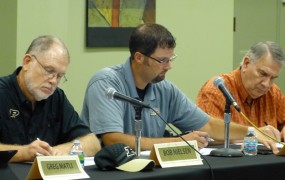 Hurt was part of a panel at the Indiana State Fair Friday crunching and then discussing the numbers. He was joined by Purdue Extension corn specialist Bob Nielsen who isn’t convinced about the Indiana production estimate.

“I guess I’d say that I’m a little surprised by how high the estimates are, but it’s certainly not without precedent, and it’s certainly within the range of yields that we might expect, given the kind of crop condition ratings that we’ve had around the state this year,” he said.

Extension soybean specialist Shaun Casteel joined them, and like Nielsen, he said the next 30-45 days will go a long way in determining whether we really see records broken. Listen to the panel discussion here, starting with Greg Matli with NASS:Purdue crop report panel