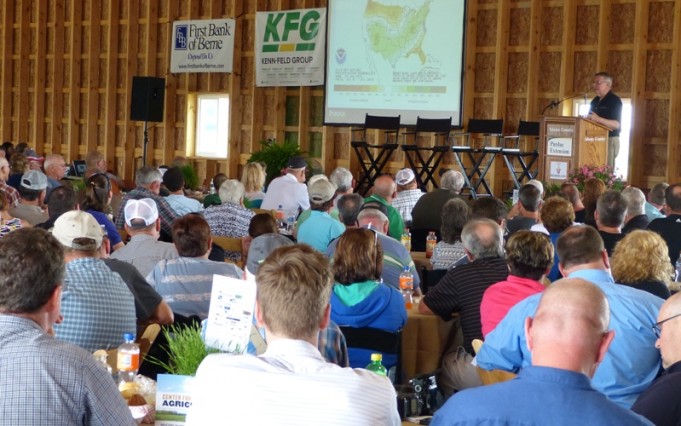 Wait and see on crops and markets

The Purdue Farm Management Tour wrapped up in Adams County near Decatur Wednesday with a stop at the Nidlinger farm and an updated market outlook from Dr. Chris Hurt, who was named an Honorary Master Farmer the night before. For struggling crops and the market prices we’re now simply in a wait and see mode.

“I think as we look at the grain markets in particular we’ve been in a malaise if you will. I’m talking about the market in general, thinking that the world inventories are sufficient, that we got off to a pretty good start in the U.S. Many were saying it was a great start in the United States as if the crop were made. I think the last 2-3 weeks have reminded us this crop is not made. There are vulnerabilities out there and what we see in pricing is a market that’s trying to find a bottom. The higher prices would be good. The discouraging thing of course is it’s happening in our area where we’re really looking at some of these losses that could be quite severe.”

Hurt updated a crowd of over 400 on his latest corn and soybean estimates following USDA’s recent declines in crop condition and continued soybean planting delays.

“I took about 9 bushels to the acre off an average acre of corn in Indiana from just this last week, all the wet weather that we’ve had and about 2 bushels on soybeans.”

The decline in crop condition has led to higher prices.

“My estimates are we’ve already lost about 130 million bushels of corn across the United States. Again that’s just using these crop ratings that come out every Monday from USDA, and about 100 million bushels of soybeans. I think on corn, just that loss up to this point is maybe 10-15 cents on corn and it’s probably more like 25-30, maybe 35 cents higher on soybeans. And of course the question is what happens next?”

What happens next is a continued eye on the weather to see what kind of rescue it can provide in needed areas. Hurt told HAT he believes there is upside potential in the market, but low prices have certainly stimulated use. He did encourage growers not to give up on the 2015 crop.

“You just never know how this will turn out, so stay with it,” he said.