Ohio-Signature-Food
For many, the biggest challenge facing food entrepreneurs is getting their innovative product to that next step, actual product development. Jim Konecny with the Center for Innovative Food Technology (CIFT) in Toledo, Ohio says their Signature Food Contest showcases local products that are ready for actual development.

“We hear often from people they have a unique food product that they bring to maybe family gatherings or maybe even to their work place and people tend to rave about them and then what they often hear is “boy you ought to get that on store shelves,” but they don’t have that outlet to make that happen, so that’s where this contest comes in,” said Konecny.

Judging is based on, among other things, the viability of the product and commercialization potential. Paula Ray, small business coordinator for CIFT says the winners then receive technical assistance. 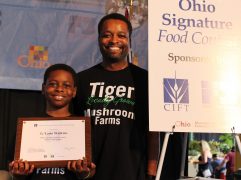 “Writing business plans, getting their nutritional information, getting their processing authority letter because they’ve been it at home pretty much, so now we have to start looking at the regulations through the Ohio Department of Agriculture, Food and Drug, health departments, the technical things,” Ray said.

Te’Lario Watkins, one of this year’s winners was having a problem finding a facility to produce his Shiitake Onion Soup Mix.

“We searched around Columbus, found a small operation, but just couldn’t really coordinate the timing and get in to their facility to begin to create the product on a larger scale,” Watkins said. “Our hope is that CIFT will help us to create a product that is commercially marketable, that we will be able to offer the product in grocery stores, I would think that restaurants would like to use the seasoning as well and move into just a more commercial production of the shiitake onion soup mix and sell it across the nation, across the world.” 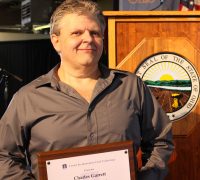 For Charles Garrett getting his Hot Pepper Relish to the next step probably wouldn’t have happened without the contest.

“No, I don’t really think so, at least for myself you know I was just kind of plodding along and without this win I may not have ever taken it to the next level, so I do believe this is going to be instrumental,” Garrett said.

Paula Ray says what’s unique about this year’s winners, they are not only making the product, they are also growing their own ingredients.