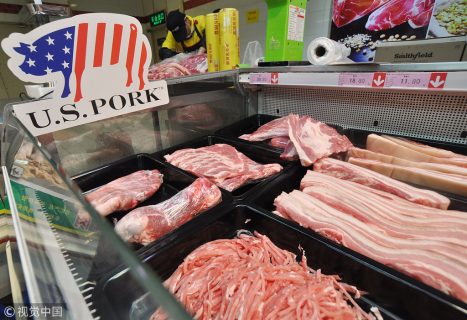 The hog complex has seen multiple days of impressive gains this week. In USDA’s latest export sales report, net sales of pork totaled more than 53,000 metric tons. That’s the second highest of the calendar year to date. 54 percent of that went to China.

According to Karl Setzer of AgriVisor, China has been purchasing all the pork they can from the U.S. and Brazil.

“Brazil just can’t get pork out like the U.S. can,” he said. “We’ve got this huge backlog of hogs that we’ve got to get through and our cold storage is big. It’s been exactly what that entire hog complex needs.”

There have been plenty of reports that China is rebuilding their hog herd after African swine fever (ASF) ravaged half their herd. Setzer said China has auctioned roughly 500,000 metric tons of pork out of their governmental reserves.

“I have a feeling the Chinese thought their hog herd would be a lot further along in the rebuilding process than what it currently is,” he said. “They have added a lot of hogs, their numbers are growing, but they’re not growing fast enough. All of a sudden you catch wind there’s been another outbreak of ASF.”

China has launched the “Clean Plate Campaign.” BBC reported this was in response to food waste from the pandemic. Setzer is skeptical that it’s about eliminating food waste.

“China is telling us there’s not a food shortage, but yet something doesn’t add up,” he said. “China is rebuilding their hog herd, but they’re not building it fast enough to meet their demand.”

Smaller Chinese pork producers are moving to urban areas to get away from the issues that helped contribute to the ASF outbreak. With all these people now having to buy their own pork, it’s been tough on infrastructure.

“It snowballed quick,” said Setzer. “I’ve got a feeling this Chinese pork demand we’re seeing is probably going to last at least another year, maybe 18 months. This has given hogs a bit more support.”

Setzer talks more about pork exports and cattle prices in the full audio in the player above.