One Clinton County, Indiana farmer is facing post harvest field conditions that many others are also going to have to contend with. Mike Beard near Frankfort wrapped up the corn and soybean harvest Sunday, but then started to break up compacted soils before pausing for Tuesday rains. Beard tells HAT the ground is really hard.

“If the airport needs another place to land a big plane, my ground is certainly hard enough to support it, so we’re working to try and break some of that up. I’m not really crazy about doing a lot of tillage but I think it’s necessary.”

Mid-summer he told a gathering at his farm that the crops were probably going to be the worst ever. As it turns out they weren’t. But the corn crop was one of the worst.

“Yields were totally dependent on when the crop was planted,” he said. “We had some really good yields and we had some terrible yields, so it was all about timing and my crystal ball last April-May wasn’t near as clear as it is today. The soybean situation, they always told me that soybeans hated wet feet but apparently my soybeans tolerated it because they did survive and we’re near average.”

It was of course a very wet start for the soybeans but Beard says the crop survived the year in impressive fashion.

“I thought the first 8 weeks after planting they just got up, but they just sat there. They didn’t grow much. But the last 6-8 weeks they really took off. So it’s an amazing plant, and one we like to talk about.”

One of the varieties the United Soybean Board director likes to talk about is high oleic soybeans and those yields were very comparable this year. 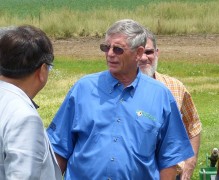 “The crop was quite healthy except for where they just drowned out and I wouldn’t expect any soybean to survive that,” Beard told HAT. “They yielded right along with my top yielders, so I was really pleased with the high oleic variety that I planted, and its yield and yield potential.”

And Beard says the premiums being paid farmers who plant high oleic soybeans are a real advantage on the revenue side.

“The premium that we can receive for maintaining an identity preservation here is in my area about 50 cents a bushel if I store them on the farm. Some areas where you can deliver them right off the combine it’s a little less, but it’s still a premium.”

As a USB director Beard is often promoting the quality oil that comes from high oleic soybeans. Hear more in the HAT interview:Mike Beard 2015 harvest