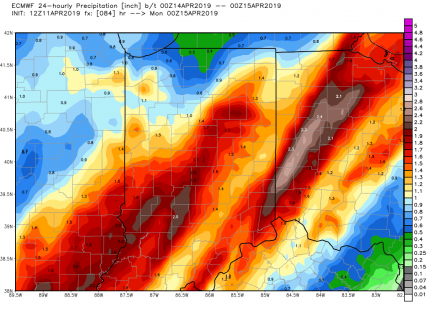 Following a relatively mild and damp start, showers look to come to an end from west to east across the Hoosier State this morning and will quickly be followed by clearing into this afternoon. While it won’t be AS windy, winds will remain elevated out of the southwest at 10 to 20 with occasional gusts to around 30 mph as high temps cool off into the 50’s northwest and into the 60’s elsewhere with lots of late day sunshine.

We slide into the weekend on a dry note as high pressure looks to bring some quiet conditions Saturday. After starting off the day in the upper 30’s and 40’s, morning sunshine gives way to increasing clouds ahead of our next storm system as highs top out in the 50’s and 60’s. Winds will be light a variable on Saturday for Southern Indiana. They turn around to the west for central and northern parts of the state.

The potential for heavy rainfall is going up as another potent low-pressure system looks to track from the Lower Mississippi River Valley into the Lower Ohio Valley Saturday night. While the heaviest rainfall looks to occur during the morning hours on Sunday, the potential for showers will remain throughout the day. This could be a real soaker with current data suggesting that central and southern parts of the state could be looking at widespread one to two-inch rainfall amounts and on the order of a half inch to an inch across Northern Indiana.

We’ll get some clearing with cooler conditions on Monday as highs range from the 40’s north to near 60 southwest. The cool down will be short lived however as warming winds return on Tuesday with highs surging back into the 70s. The warmth continues midweek with the chance for showers again by late on Wednesday.

There is the potential for more heavy rain and thunderstorms next Thursday and data strongly suggests another cool down heading into next weekend. Just how much of a cool down remains to be seen, but there have been a number of model runs pointing at the possibility of some very cold rain showers or even wet snow! At this point, it’s unclear how long the cooler weather will last.