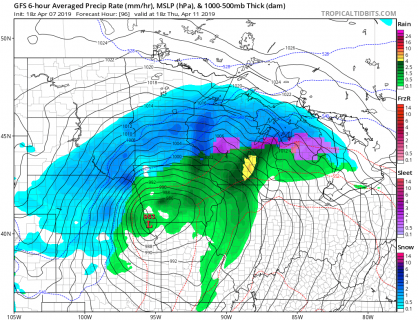 A cold front hangs up across southern parts of the state with morning showers possibly lingering into the afternoon along or south of I-70. Behind this front the clouds will erode from northwest to southeast across the state and temps look to be mild with middle 60’s with clouds hanging on for Southern Indiana and temps into the lower 70’s elsewhere.  Rain totals will be quite light ranging from a few hundredths to about a tenth of an inch down near the Ohio River.

Temps cool off some on Tuesday but we will take that with abundant sunshine returning statewide. After starting off with temps in the 40’s for most, temps rebound back into the upper 50’s to near 60’s for areas like Fort Wayne and South Bend, and into the middle to upper 60’s through the central and southern parts of the Hoosier State. Winds through the period look look to remain fairly light on the order of 5-10 mph out of the west today, before turning towards the northwest at around 10-20mph on Tuesday. 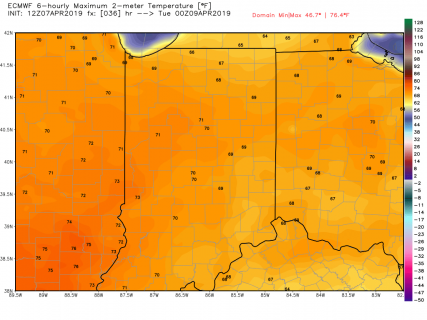 Clouds will be back on the increase on Wednesday ahead of a strong storm system that’s expected to develop across the Plains. This low pressure area looks to push a warm front into the Midwest bringing back the chance for rain for northern sections of the state. Winds will turn around to the east and southeast on Wednesday with a sharp temperature gradient as temps fail to escape the 40’s across Northern Indiana. However, to the south where there will be more sunshine temps should improve through the 60’s to near 70 degrees.

The approach of the Plains storm system will all the entire state to get into the warm sector on Thursday as a strong south breeze develops pushing temps well up into the 70’s despite an increase in cloud cover. A large area of rain with embedded rumbles of thunder look to move from west to east across the state Thursday night in advance of the actual cold front that arrives Friday morning. Rainfall on the order of a quarter to half inch appear likely at this time.

Temps will cool as we slide into the weekend on a dry note.  High pressure looks to bring some quiet conditions Saturday.  Data suggest another low will form across the Lower Mississippi River Valley by late Saturday driving the potential for possibly heavy rainfall Saturday night and into Sunday especially for southern parts of the state.

Looking further out data suggests a quite period shaping up for the first half of next week and temps that look to be warming during that period as well.