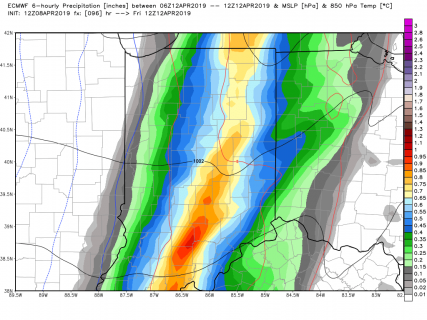 Temps cool off some on Tuesday, but we will take that with abundant sunshine returning statewide. After starting off in the 40’s for most, temps rebound back into the upper 50’s to near 60’s for areas like Fort Wayne and South Bend, and into the middle to upper 60’s through the central and southern parts of the Hoosier State. Winds turn around to the northwest at around 10 to 20 mph.

Clouds increase some on Wednesday ahead of a strong late season winter storm system set to take shape across the Plains. This low-pressure area looks to push an elevated warm front into the Midwest bringing back the chance for rain for northern sections of the state along and mainly north of I-70. Winds will turn around to the east and southeast on Wednesday with a sharp temperature gradient developing as temps fail to escape the 40’s across Northern Indiana. However, to the south, where there will be more sunshine, temps should improve through the 60’s to near 70 degrees.

The approach of the Plains storm system will help engulf the entire state into the warm sector on Thursday as a strong south breeze develops elevating temps well up into the 70’s for everyone with the exception, perhaps, for far Northern Indiana where winds will remain backed out of the east as clouds will remain most persistent. To the south, temps could approach 80 along the Ohio River.

This warmth along with a stream of low-level moisture may set the stage for some rough weather Thursday night with a squall line of showers and thunderstorms expected to traverse from west to east across the state. Some of these storms, especially for Southwestern Indiana could be strong with damaging wind potential. Rainfall on the order of a half inch to an inch appear likely at this time with heaviest rains falling into the Wabash River Valley.

Behind this storm, temps will cool with showers ending during the morning hours on Friday.  We slide into the weekend on a dry note as high pressure looks to bring some quiet conditions Saturday with cooler temps in the 40’s and 50’s for most of the state.

Another low-pressure center looks to form across the Lower Mississippi River Valley by late Saturday driving the potential for more rainfall, possibly heavy, Saturday night and into early Sunday for southern sections of the Hoosier State. Trends suggest that rain will be much lighter across Northern Indiana with the weekend system.

Looking further out data favors a dry but cool start to next week as temps warm from the lower 50’s into the 60’s for a high Monday and into Tuesday with a good deal of sun both days.  We’ll see a chance of rain returning by next Wednesday.