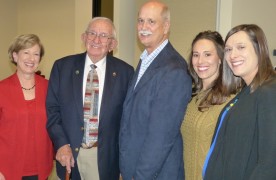 A luncheon in Indianapolis on Monday gave many of Don Villwock’s longtime friends and those running the state’s commodity groups a chance to say thanks for his many years of service. He’s retiring as Indiana Farm Bureau president and is also on the American Farm Bureau presidential campaigning trail. They pulled off the planned surprise.

“It was a big surprise as they brought a big cadre of folks from almost every ag profession here today without my knowledge, and my family was here to surprise me as well. So it was a great, fun event and an emotional event because many in this group have traveled with me for my whole career and really been allies but most importantly friends in agriculture.”

Among those present to honor Villwock was longtime friend and a noted Indiana ag leader and advocate Maury Williamson. 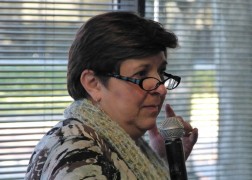 “We made the trip but I would go hundreds of miles because the half century I’ve been around him he’s genuine. He’s never lost that love for the land and the people who are on it,” Williamson said. “We just hope he gets to be national president because he is a well organized, determined leader.”

Jane Ade Stevens, Executive Director of Indiana Soybean Alliance and Indiana Corn which hosted the lunch, told HAT Villwock is a farmer who would prefer to be farming but “knows how to be a great leader in the boardroom for 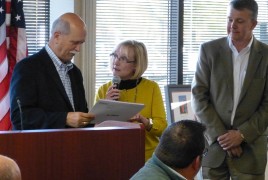 farmers on really tough, difficult issues. It’s a really special person who can do that and willing to give the time to do that because obviously it takes a lot of time. We are very honored that he has been with us as president in Indiana and even more excited that he might be the next president of American Farm Bureau Federation.”

Don Villwock was presented with a variety of gifts including a premium table for 10 at February’s Purdue Ag Alumni Fish Fry featuring retired basketball coaches Gene Keady and Bob Knight.

Is Planting Soybeans in 15-Inch Rows With Split-Row Planters Profitable?

Moth Trap Captures “Springing” Up, Currently Other “Worms” Being Found

Planting Window Opening Up Next Week