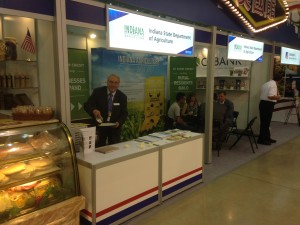 One of the largest international food shows in Asia is underway in Taiwan, and Indiana is the star of the show.  Lt. Governor Sue Ellspermann participated in the official opening of the show in Taipei, and she said the smell of Indiana popcorn is drawing big crowds to the Hoosier exhibit, “There are over 1500 exhibitors here. Indiana is part of the USA pavilion. We have been highlighting our Indiana popcorn along with other Indiana ag products.” She said interest in what Indiana has to offer has been strong.

Ellspermann signed several memorandums of understanding with Taiwan involving Indiana hardwood products and soybean oil. She said there is a great deal of appreation in Taiwan  for the quality of US soybeans. In an interview with HAT from Taipei, Ellspermann said there are other market opportunities for Indiana agriculture in Asia, “I think there is a real opportunity for dairy products, including powered milk, cheese, and ice cream.”  Ellspermann said many young people in Asia have grown up on pizza and have thus acquired a taste for cheese. She added that there was also a great deal of interest in ice cream, “Many people were impressed to learn that Indiana is No. 2 in the US in the production of ice cream.”

Currently, US pork is at the center of trade negotiations. While this is an issue well beyond the scope of the trade mission, Ellspermann said the topic was discussed, “We are talking about pork where we can and learning about some of the challenges they are facing on the issue.”  The Lt. Governors from Washington and Missouri also attended the food show this week. The trade mission concludes this weekend; HAT coverage is made possible by Farm Credit Services of Mid America.