Mid-to-late-week rainfall continues to delay harvest progress, according to Greg Matli, Indiana State Statistician for the USDA’s National Agricultural Statistics Service. Heavy winds during weekend storms caused reports of crop damage in some areas, while low temperatures brought reports of frost throughout the state. The statewide average temperature was 40.5 degrees, 1.8 degrees below normal. Statewide precipitation was 1.89 inches, above average by 1.13 inches. There were 3.2 days available for fieldwork for the week ending November 19, down 0.7 days from the previous week. 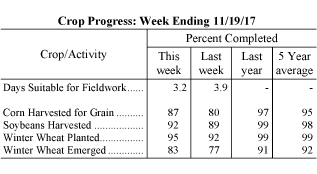 A relatively dry start to the week allowed farmers to make headway with the corn harvest, but high soil moisture carried over from last week prevented much progress with soybean harvest. Winter wheat planting is wrapping up in some areas, and emergence is moving along steadily. Livestock were reported in good condition with muddy conditions in some feedlots. Other activities for the week included drying and hauling grain to elevators, spreading fall fertilizer, fall tillage, and cleaning equipment for winter storage.