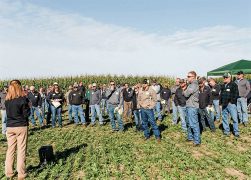 The Lafayette area was host last week to the 10th annual Conservation in Action Tour which provided a look at the progress in conservation farming in Indiana. The progress is quite notable, and cover crops have a lot to do with that.

“Cover crops are being adopted rapidly in Indiana,” she said. “Minus Texas which is able to compete on just pure size, Indiana is actually leading the country in cover crop adoption, which is awesome. Guys are starting to see what the benefits are; the erosion control, it’s the organic matter building, the compaction issues, it’s weed suppression.” 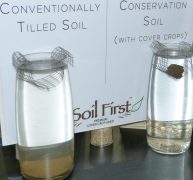 Blue is regional sales manager for La Crosse Seed. She has a great soil demonstration showing the stark difference in soil from a conventionally tilled field and a cover crop-no till field.

“The conventionally tilled field the soil is already completely dissolved. Farmers are visual learners and that’s what we love because with cover crops we’re able to show what it is that they do. It’s not comparing, for lack of a better term snake oil and chemicals and is it actually working. With cover crops you can see the difference in what it’s doing in your field on a year to year basis, and over time you’re able to take those soil tests and see how your organic matter is increasing throughout the time that you continuously use cover crops.” 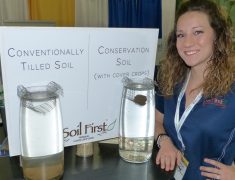 She uses a kitchen analogy while suggesting cover crop farmers use patience awaiting the benefits.

“I like to say that we’re in the crock pot business,” she told HAT. “This is a long term goal with your fields, it’s not a short term goal.”