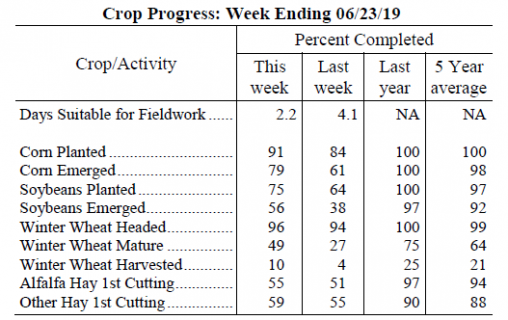 Wet weather returned last week and limited fieldwork in much of the state, according to Greg Matli, State Statistician, USDA NASS, Indiana Field Office. Steady rains throughout the week pushed soil moisture levels back up, far exceeding the levels of the previous year and the five-year average.

The average temperature for the week was 70.5 degrees Fahrenheit, 1.9 degrees below normal for the state. The amount of rainfall varied from 0.43 inches to 6.17 inches over the week. The statewide average precipitation was 2.18 inches. There were 2.2 days suitable for fieldwork for the week ending June 23.

With the corn planting window closing in some areas, farmers focused on soybean planting as weather allowed last week. Winter wheat conditions declined slightly due to the continually cool and wet conditions, and harvest progressed slowly. Hay cutting continued to fall behind due to excessive rainfall which caused concerns of potential hay shortages. Other activities for the week included spreading fertilizer, spraying for weeds, and visiting FSA offices.