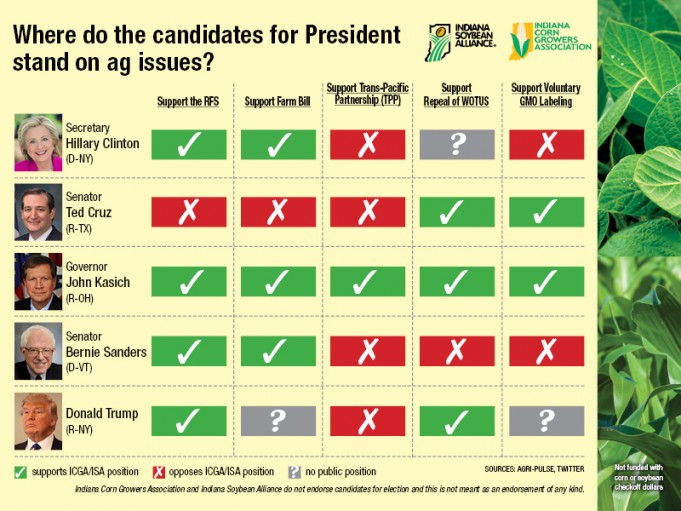 On a rainy Thursday morning the president of the Indiana Corn Growers Association took a break from field preparation in Spencer County to get back in the office and focus on candidates running for U.S. President as they begin to pop up in the Hoosier state. With the May primary getting closer the ICGA has released a scorecard to illustrate where the candidates stand on the most pressing farmer issues. Mike Nichols told HAT the scorecard is important information for farmers, but it does not constitute a candidate endorsement.

“We feel it’s important that the individual will make up his own mind. He needs to vote for his pocketbook, and I think it would be very presumptuous for us to do that for them. We’re all intelligent individuals and can make up our own mind, but I think this year with the conditions that we’re in with commodity prices, we need to vote our pocketbook.”

The Indiana corn and soybean policy organizations used public statements, survey responses, sponsored legislation and even social media statements to score the candidates on support of the Renewable Fuel Standard, the farm bill, the Trans-Pacific Partnership trade agreement (TPP), repeal of EPA’s Waters of the US rule (WOTUS), and voluntary GMO labeling legislation.

“These are the issues that we see our very important to us,” Nichols said, “and I think the farmer needs to take a look at it and see where the five candidates stand. Are we supporting any particular one? No we’re not. All we’re saying is this is the information that we have to the best of our knowledge where they stand, and they just need to take a look at it. If they get the opportunity to quiz them about it, please do so. These are things that we feel we need to know.”

Only Ohio Governor John Kasich supports all 5 corn and soybean positions. Ted Cruz and Bernie Sanders only support 2 of the 5, and the front runners, Donald Trump and Hillary Clinton both have question marks on an issue or 2 where their position is unknown. Was that a surprise to find?

“It doesn’t surprise me. It may not be an issues they have dealt with because of where they’re located in the northeast. So I would understand that it may be an issue that they just haven’t come across.”

Nichols added agriculture is very important not only to farmers but the state of Indiana’s economic engine, so he encouraged farmers and those in related industries take every opportunity to speak with the candidates as they visit Indiana and politely press them on ag issues.