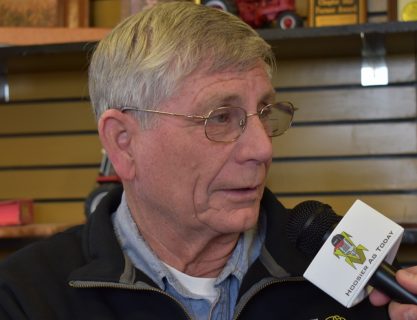 Recent work funded by the Indiana Corn Marketing Council is paying dividends for not only Indiana corn growers, but the meat and poultry industries as well. Clinton County farmer and ICMC President Mike Beard says, “We have partnered up with the Poultry Export Council, we partnered up with the USMEF (U.S. Meat Export Federation) to fund programs that explore the opportunities for exports of meat and poultry. We’ve used checkoff funds to participate in in those programs, and we’ve seen them work. We’ve seen it work in Korea, Mexico, and Japan.”

Beard noted that they will also be focusing in on Argentina after the announcement last week that they will welcome U.S. pork for the first time in over 25 years.

He says that Indiana livestock is the number one consumer of Indiana corn, and it makes sense to help promote livestock exports to increase corn demand.

“If the livestock are fed here at home it’s just more value added to the corn for us, the livestock for the producer, and then there’s those multiplier effects that go to the people work at processing plants. All the things that go down the line- transportation, logistics, all those kinds of things.”

Click here for more information on the Indiana Corn Marketing Council’s partnership with USMEF to increase the demand for pork in South Korea.