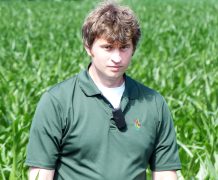 As expected with a very choppy spring planting season, Indiana crops are off to a start full of variability. During a check on crops north of Frankfort in Clinton County Monday, fields right next to each other look very different, depending on the planting date and whether replant was necessary. Agronomist Matt Hutcheson says that’s an accurate snapshot of all of Indiana.

“I think there are problems everywhere,” he told HAT. “It’s kind of scattered and some areas are worse than others, but everyone has faced the same issues across the state.”

Heavy rains kept farmers from planting when they wanted to and created many replant situations this year. In some cases replanting has occurred over and over again, leading to a staggered start and creating what will be a season of adjustments.

“We have earlier planted corn that’s going to pollinate earlier, mature earlier at harvest and dry down faster, and then this later planted corn is going to pollinate several weeks later and we’ll be wetter at harvest. So, throughout the growing season we’re going to be looking at corn in various stages of development, and even in harvest we’ll be facing some management decisions in terms of which fields to harvest first, which are dryer, and where we may need to run the dryers a little bit more in the fall.”

As Hutcheson looks way down the road to the Indiana harvest, some areas could have decent corn yields, “but I think there are going to be a lot of areas where the yields are going to be reduced,” he said. “Maybe not a whole field had to be replanted but parts of it or there’s parts of fields that were drowned out and may not produce anything. So, those pockets of low to no yield in our fields this year are going to be an issue and are definitely going to bring down our averages.”