Indiana Corn and Soy CEO to Retire at Year’s End 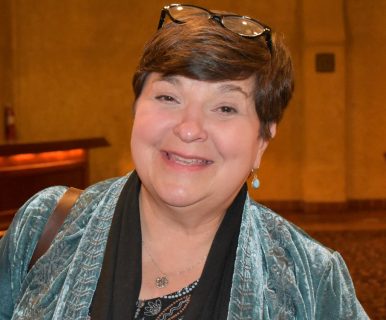 At last week’s Student Soybean Innovation Competition presented by the Indiana Soybean Alliance, Indiana Corn and Soy CEO Jane Ade Stevens announced her retirement from the organization after being its leader for the past decade. Stevens recounted many things that she believes were major accomplishments for the organization during her tenure as CEO.

“Having the corn and soybean checkoff programs put funding into the phenotyping center, I think, is a wonderful long-term legacy project for farmers to know that we’re working on the cutting edge of the next phase of agriculture for our grandchildren. Certainly, the glass barn at the Indiana State Fair. Talking to consumers about why we farm the way we do today is critically important.”

Stevens told HAT that she always wanted to be in agriculture, but that’s not where she started out at Purdue.

“That was back in the day and my father said, ‘Well girls aren’t in agriculture.’ So, I started at Purdue in home economics and I’m not a very good cook.”

She then met a woman in the ag program at Purdue, went back and told her dad, and ended up graduating from Purdue with an Ag Communication degree in 1976.

After that, Stevens said she, “Never looked back. I’ve worked for lots of different companies. Elanco, Farm Bureau, they’ve all been wonderful experiences, but the one thing that’s always been a thread is that I had to have a job that kept me connected directly with the farmers.”

Stevens will retire at the end of the year. She says she plans to spend more time with her one and only granddaughter, wearing her soy-based flip flops down in the Virgin Islands.

She told me that she’s very fortunate, and she’s very thankful for the farmers in Indiana, “For allowing me to work with them; and in particular, because I’m a woman. When I started my career, it was still pretty unusual. They have been very gracious and helped me find a career, and I hope that I have helped inspire other women to know that you can get a job in agriculture. I love my dad and he was always right, but one time he was wrong.”

A search committee for her replacement is already underway with the hopes of having a name to the board of directors sometime in August.