Growers had a favorable week for fieldwork with cooler temperatures and reduced precipitation, according to Greg Matli, Indiana State Statistician for the USDA’s National Agricultural Statistics Service. Although it rained some during the week, many farmers needed to run irrigation systems on their fields. Portions of Southern Indiana continued to have waterlogged spots. The statewide average temperature was 72.2 degrees, 1.8 degrees below normal. Statewide precipitation was 0.80 inches, below average by 0.11 inches. There were 5.0 days available for fieldwork for the week ending July 30 up 0.7 days from the previous week. 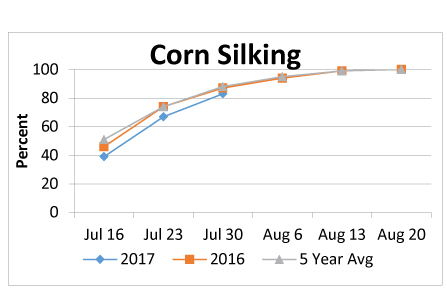 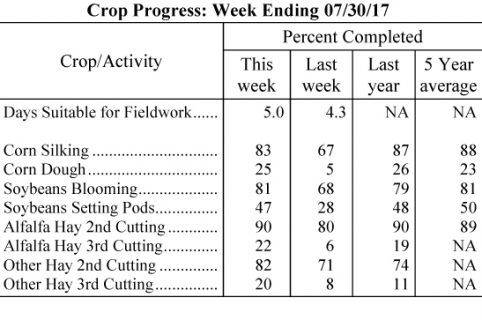 The relatively dry week and cooler temperatures allowed both the corn and soybean conditions to improve. Some cases of Common and Southern Rust appeared in corn fields in the South, and were treated quickly with fungicide. Irrigation systems were running in Northern Indiana over the weekend primarily for specialty crops to keep them from becoming too dry. Patches of corn and soybeans continued to be stunted and yellowed in areas that previously had excessive moisture. There were some reports of strong winds lodging corn. The dryer week was favorable for cutting and baling hay.