Hot and dry conditions through most of the week stressed crops, particularly in northeastern Indiana, according to Greg Matli, Indiana State Statistician for the USDA’s National Agricultural Statistics Service. High temperatures and a lack of rain warranted continued use of irrigation systems. Some areas received rain on Friday but relief was limited. The U.S. Drought Monitor reported moderate drought in large portions of Allen, Elkhart, Lagrange, Noble and Kosciusko Counties. Most of central and southern Indiana received more rainfall, and crop conditions continued to fare better there. Statewide average temperature was 78.4 degrees, above normal by 5.5 degrees. Statewide precipitation was 1.43 inches, above normal by 0.61 inches. There were 5.5 days available for fieldwork for the week ending August 14, down 0.7 days from the previous week. 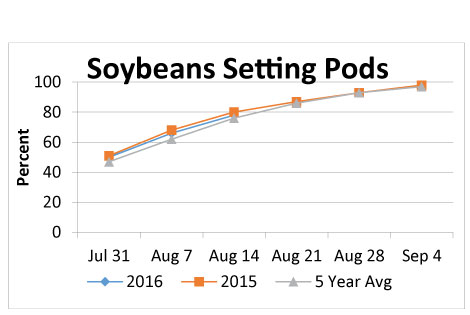 Winter wheat harvest is complete. Some farmers baled hay prior to the rains while other waited to cut until rain fell. Pastures in the northern part of the state continued to decline. Livestock were stressed due by hot temperatures. 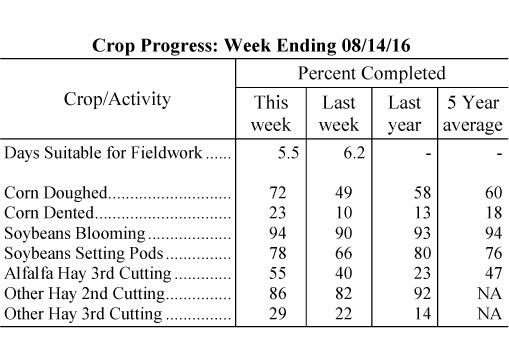