Late maturing crops, seeded wheat fields and pastures received some much needed rain, according to Greg Matli, Indiana State Statistician for the USDA’s National Agricultural Statistics Service. Farmers welcomed the rain as it helped restore moisture levels in dry fields. Harvest, however, will be delayed until fields dry out some. The statewide average temperature was 63.8 degrees, 8.6 degrees above normal. Statewide precipitation was 1.35 inches, above average by 0.83 inches. There were 3.3 days available for fieldwork for the week ending October 15, down 1.4 days from the previous week. 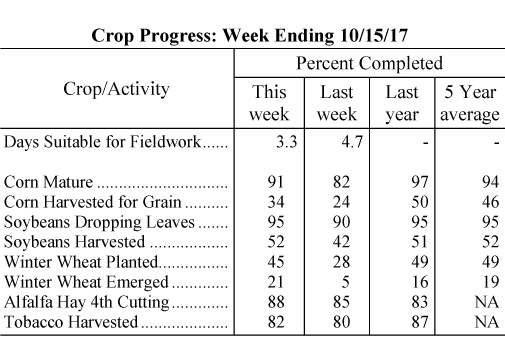 Rain and fog made for a bad week for soybean harvest. Some corn was harvested between showers. Winter wheat and cover crops have started to emerge and appear to have good stands. There is still more winter wheat to be planted. Forage and pastures have started to green up and grow again with warm weather and some big rains. Livestock are reported in good condition. Other activities for the week included hauling grain, fall tillage, and application of lime, manure and fall fertilizer.