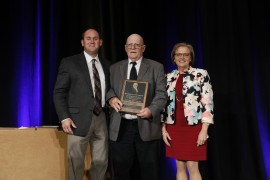 The National Dairy Promotion and Research Board (NDB) honored Steve Frischknecht and Donald Gurtner as the 2016 recipients of the Richard E. Lyng Award for their contributions and distinguished service to dairy promotion.

The award is named for former U.S. Department of Agriculture Secretary Richard E. Lyng, who played a critical role in implementing policies that led to the establishment of the NDB more than 30 years ago. The Lyng Award honors leaders who have made a significant contribution to dairy promotion that benefits the entire industry.

“Steve and Don are stellar examples of dairy farmer leadership,” said Zach Myers, North Carolina dairy farmer and chair of the NDB. Frischknecht was a leader in dairy promotion for more than 20 years, including several as secretary of UDIA. Gurtner has devoted 35-plus years to promoting dairy in Indiana, serving as a national director of UDIA for more than 20 years and as chair of American Dairy Association Indiana since 1985.

“Steve’s work on both local and national promotion boards helped pave the road to creating partnerships and advancing the checkoff’s mission,” Myers said. “Within Utah, he worked tirelessly to ensure that dairy and agriculture were in the forefront, from serving on county and state fair boards to being an advocate for dairy with consumers and thought leaders.”

Gurtner’s impact transformed dairy promotion in Indiana, helping guide the merger of three separate dairy promotion organizations to eliminate redundancies, save resources and to strengthen dairy’s voice. “Don has dedicated his time, knowledge and leadership to farmers for decades, making a real difference for farmers not just in Indiana, but throughout the country,” Myers added.

As part of the Richard E. Lyng Award, the NDB will contribute $2,500 to Snow College (Ephraim, Utah) in Frischknecht’s name and $2,500 to Purdue University in Gurtner’s name.