A hot and mostly dry week left West Central Indiana in moderate drought conditions going into harvest season, according to Greg Matli, Indiana State Statistician for the USDA’s National Agricultural Statistics Service. A portion of Northern Indiana and Southwestern were rated as abnormally dry by the U.S. Drought Monitor. Each of these areas did receive rainfall during the week, but it was not enough to offset the abnormally hot temperatures seen across the State.

The statewide average temperature was 76.1 degrees, 13.9 degrees above normal. Statewide precipitation was 0.87 inches, above average by 0.16 inches. There were 5.9 days available for fieldwork for the week ending September 24, unchanged from the previous week. 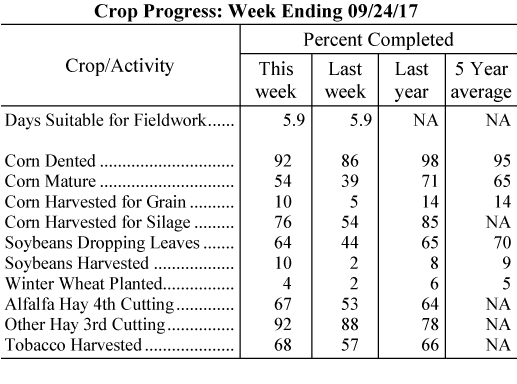 Hot temperatures helped corn and soybeans dry down more quickly for harvest. The late planted and re-planted corn and soybean fields were reported to be fairly green still and will be much later to harvest. In the drought areas, some double-cropped soybeans as well as mint fields were irrigated against the heat. Weed pressures were reported to be very high in many fields, particularly in the South. Pasture conditions continued to decline from dry conditions. Some livestock farmers have begun to supplement with hay. Pumpkins, cucumbers, and tomatoes continued to be harvested.