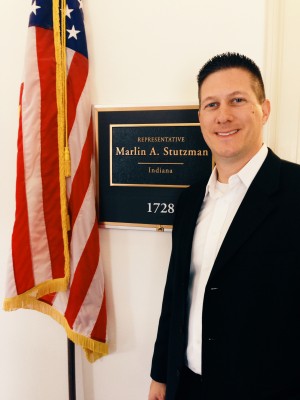 The manager of the Poet Ethanol Plant in Portland went to Washington last week to lobby for the RFS.  What he found was good support for renewable fuels, but a lot of old misconceptions still remain. Matt Tomano met with several Indiana Congressmen, including Marlin Stutzman and Luke Messer,  Congresswoman Jackie Walorski, and both Hoosier Senators who all voiced strong support for ethanol but still had some misconceptions, “They certainly had some misconceptions, but overall had a good pulse of support for ethanol and for the benefits it brings to rural communities and to the state of Indiana.”  He said there are still a lot of people in Washington who subscribe to the food vs. fuel debate; they think ethanol is driving up food prices. 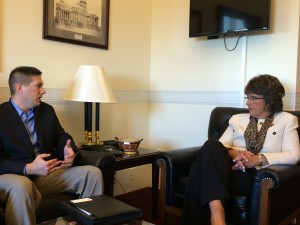 Many of the misconceptions about ethanol are being fueled by a strong and sustained effort by the oil industry to misrepresent ethanol and the Renewable Fuel Standard, “Every office we went into told us the oil industry lobby (API) had been there several times. They reported seeing several ads every day in the Washington papers that talk about how bad ethanol is for the nation.”  It is estimated that, over the past 5 years, the oil industry has spent over $800 million to lobby against renewable energy.

The EPA is expected to make its ruling on blending limits by June. After that, Tomano says, it is expected there will be efforts in Congress to modify or dismantle the RFS, “We talked with the lawmakers about how we will need their support going forward to keep the RFS intact.”  He added the oil lobby likes to portray the RFS as a subsidy for ethanol when in reality it is not.  Tomano stressed the ethanol industry just wants access to the marketplace so consumers can make the choice on what kind of fuel they want to buy.