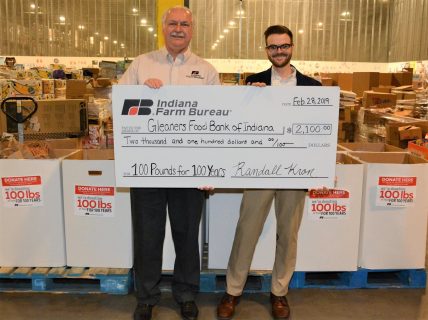 In celebration of its 100th anniversary, Indiana Farm Bureau and its county Farm Bureaus across the state donated 50 tons of food to more than 90 charities across Indiana.

INFB was founded on March 25, 1919 by a group of Indiana farmers and since its creation, the organization has had a rich history of giving back. In that same spirit of giving, INFB launched the statewide charitable giving campaign, 100 Pounds for 100 Years. Each county Farm Bureau was challenged to collect at least 100 pounds of food and donate it to a local charity prior to the anniversary.

Nearly every county Farm Bureau rose to the challenge – far surpassing the 100 pound request. In total, approximately 100,000 pounds of food was donated to more than 90 charities across the state. According to USDA’s What We Eat in America, the average meal is 1.2 pounds of food. By that average, INFB’s donation accounts for approximately 66,000 meals in Indiana.

“Hoosier farmers are always there to lend a hand to a friend, share a meal with a neighbor or support others in their communities who are less fortunate,” said INFB President Randy Kron.  “I’m so encouraged by the great results from our county Farm Bureaus, who participated in this community campaign in honor of Farm Bureau’s 100th anniversary.”