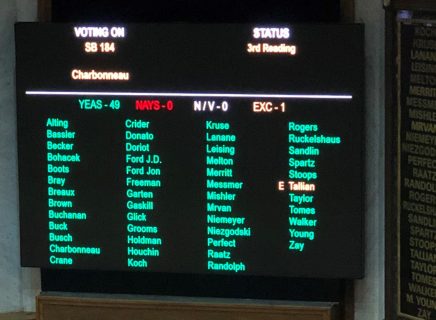 Legislation that would allow Indiana Farm Bureau to offer more affordable health benefits to its members has cleared the Indiana Senate. INFB President Randy Kron says he was a bit surprised that the bill made it through the insurance committee with an 8-0 vote and then through the full Senate with a 49-0 vote.

“I want to give a lot of credit to our members and the grassroots because the day of the Senate hearing in the Insurance Committee, we had the room full of farmers and in the hallway. I am confident that swayed a few of those senators that were kind of waffling back and forth to go ahead and support it because they saw there was a real need.”

Kron says this gives them some momentum as the bill now moves over to the Indiana House, but he doesn’t want the landslide vote in the Senate to provide false confidence for any upcoming votes in the House.

“We started in the Senate for a reason because we thought that would be a little easier lift than the House and it gets us a little more momentum. It’s going to be a little more challenging. We’re getting more questions, but the key is our members engaging. Whether they go to the Third House Crackerbarrels, sending emails, or just calls to legislators in the House and tell them how important this is.”

Kron says this is only halftime and a lot can change between now and the end of the game. The 2nd half starts Monday. They’ll know in the next day or two, but Kron assumes it will go through the House Insurance Committee to start the process over.

“I hear stories every day from individual farmers of how it’s impacting their farm or how much they are spending on healthcare. I’m surprised at the number that tell me they don’t even have healthcare right now because they just flat can’t afford it.”