The Indiana Farm Bureau headline last week said they scored big in the 2016 legislative session which ended Thursday. The largest farm organization in the state claimed success in farmland property taxes, transportation and infrastructure, annexation and tax audits and appeals.

Katrina Hall, INFB’s director of state government relations, said the highlight was passage of SB 308 and its fix of the farmland tax formula.

“I can’t tell you how happy and ecstatic I am about the victory that we were able to achieve in the property tax area. It’s the most relief I think probably that’s been granted to agriculture certainly since I have been watching the legislature involved in property taxes. It was very much needed and very much appreciated at a time when farmers really need the help because crop incomes are declining.”

“We focused on the things that are bottom line issues for the most part this session. The property tax situation was one that we had worked on for a while but certainly this was a critical year to get something done, and it was the engagement of our members and hopefully the information that we provided to them that gave them the tools to find their voice at the statehouse and make a real difference for Indiana agriculture.”

She told HAT there was a lot of heavy lifting by the Farm Bureau lobbying team on SB 308 and other bills this session. It also packs a punch when she meets with legislators alongside constituents.

“Certainly a lobbyist provides technical perspective to an issue, but it is the stories and the face of constituents and in this case grassroots members of Indiana Farm Bureau that really make the difference in explaining how a particular issue affects them. So we work really diligently to get our members to the statehouse and to participate in events locally so that their voice can be heard.” 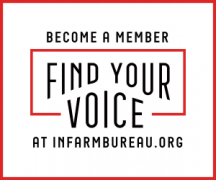 ***This bill was INFB’s top priority.

Indiana Farm Bureau is proud to announce that the conference committee report on SB 308 passed both House and Senate on Thursday evening. SB 308 makes substantive changes to the farmland value formula and provides significant savings to farmland owners.

SB 308 was discussed thoroughly each time it was considered, including in the Senate and House Rules Committees, with the only negative vote coming from Rep. David Ober (R-Albion). The full Senate passed the SB 308 conference committee report by a vote of 44-6. The bill had earlier passed the House 84-12.