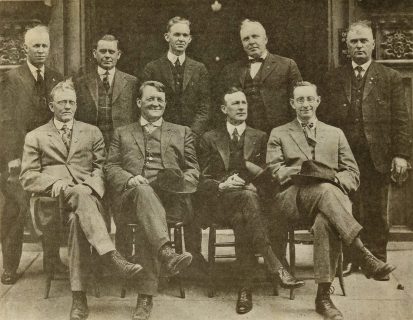 Today it’s a big anniversary, the 100th for Indiana Farm Bureau. The organization is celebrating all year but is marking the date of its founding in 1919 with ceremonies at the Indiana Statehouse, including the signing of a proclamation declaring this Indiana Farm Bureau day.

On March 25, 1919, the name was Indiana Federation of Farmers’ Associations and it was one of the first in the nation. The first meeting was at the Claypool Hotel in downtown Indianapolis, and it was there that the foundation for advocating and protecting farmers and their interests began to be built. 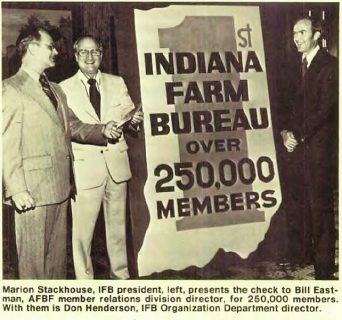 Indiana Farm Bureau was started by just a few farmers, but it grew in strength as membership hit 100,000 in 1952 and then 250,000 in 1977. Growth in INFB has come through its county Farm Bureaus in all 92 counties, a true grassroots organization from the start.

In 1922, just two years after women earned the right to vote in the United States, INFB outlined a program to incorporate women into the organization and a year later the first woman was elected to the board of directors. Today a strong and very active part of Indiana Farm Bureau is the Women’s Leadership Committee.

Indiana Farm Bureau Insurance became a part of INFB in 1934 and the next year they sold the first insurance policy.

So what does Indiana Farm Bureau do? It has always focused on educating Hoosiers about the issues and concerns of Indiana farmers and rural communities and has encouraged its members to advocate for their needs locally and at the state and national levels. One early example was in 1939 when 15,000 INFB members marched to the Statehouse to successfully save the Gross Income Tax repeal. To this day the organization prioritizes property tax issues, and just three years ago INFB helped reduce farmland property taxes by approximately $500 million.

Farm Bureau educates through Agriculture in the Classroom, where volunteers teach children about farming and where their food comes from. In 2019 those are valuable lessons for kids and adults. INFB runs the Young Farmers program for young adults in agriculture. That effort started in 1938 with the formation of Indiana Rural Youth.

Current Indiana Farm Bureau president Randy Kron sums it up easily when asked why the organization is stronger than ever at 100 years. “When I look all around our state, it’s our grass roots network that makes Farm Bureau who we are. We are a wide-reaching, member-driven organization with dedicated volunteers in every county in the state. As INFB members, we’re so proud of the legacy of this organization and we look forward to doing our part to carry that legacy into the next century. I’m confident that we will remain true to the founding purpose of this organization – to be the voice of Indiana’s agricultural community – and continue to be a vital part of one of Indiana’s largest industries.”

Happy 100th Indiana Farm Bureau, and enjoy a well-deserved day of celebration and recognition at the statehouse today.