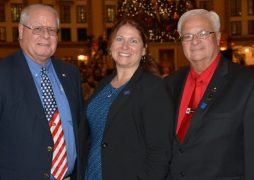 All three new board members were voted into their positions in late 2017 by INFB member delegates in their district. Board members serve three-year terms and can serve no more than four successive terms.

Paris and his wife, Diane, are heavily involved in agriculture. They own and operate Clifty Creek Farm in southern Rush County where they raise alpacas and process the fiber into products sold at farmers markets, festivals, online and elsewhere. They also own two farms in Shelby County and Paris and his brothers own Lone Hill Farms Inc. with farms in Boone, Fayette and Fountain counties.

Prior to his election to the board, Paris served in the staff position of regional manager at INFB for 37 years where he served on numerous strategic planning and steering committees for the organization.

Feutz has a degree in veterinary medicine, holds a separate Ph.D. in equine respiratory disease and is a consultant for the veterinary hospital owned by her husband, John, and his father. She farms with her husband and his family, maintaining a cow-calf herd that includes registered Angus cattle for breeding stock or show and commercial beef cattle. They also raise hay and sell produce.

Prior to her election to the board, Feutz actively participated in the INFB Young Farmer program, winning the Indiana Excellence in Ag Award in 2012. She also served one term as the District 9 education and outreach coordinator and as the public relations coordinator for Gibson County Farm Bureau.

Geswein is an energy advisor for Harrison Rural Electric Membership Cooperative, a position he’s held for more than 22 years, where he’s presented around 1,000 energy seminars. He also owns a small farm that produces corn and soybeans and Geswein also collects vintage tractors.

Prior to serving as director, Geswein was the Floyd County Farm Bureau president for 14 years. He’s also served as the county’s vice president and delegate. At the state level, Geswein has served on several committees and nationally as a delegate at the American Farm Bureau convention.