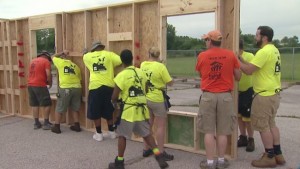 On the far north side of the Indiana State Fair, there are two homes being built. These are part of the Habitat for Humanity project where Hoosier ag companies and farm groups volunteer their time to help build homes for Indianapolis families. Over the past 6 years, more than 30 agricultural related companies have supported, what has come to be known as the “Ag Build” with volunteers and funding. This year, Indiana’s major farm co-ops came together to join in. “We feel it is part of our mission and our heritage, to give back,” said Scott Logue, CEO of Harvest Land Co-op based in Richmond. In addition, Co-Alliance, Ceres Solutions, North Central Co-op, and Premier Co-op participated in the project.

While co-ops are independent businesses, they are working together more and more to serve not only the farmers in their areas, but U.S. agriculture as a whole. Logue stated, “There used to be over 80 local co-ops in the state, now there are about 17, so we work together quite a bit.”  Getting the co-ops involved in the Ag Build came at the direction of the AgriInstitute leadership program. Executive Director Beth Archer led the push to bring these groups together. Land O’Lakes co-op was also involved in the project and hosted a lunch for the co-op  volunteers at the Normandy Barn at the fairgrounds.

While the co-op business model is over 100 years old, Logue says farmer-owned co-ops are still relevant and will play a future in American agriculture, “American farmers must be competitive in a world market, and we can help them be competitive.” With companies becoming multinational, local co-ops are the link to the men and women on the land.

The two Habitat homes will be completed by the end of the Fair and then moved to their permanent locations in a nearby neighborhood in Indianapolis. The Ag Build at the State Fair is the only program of its kind in the nation.