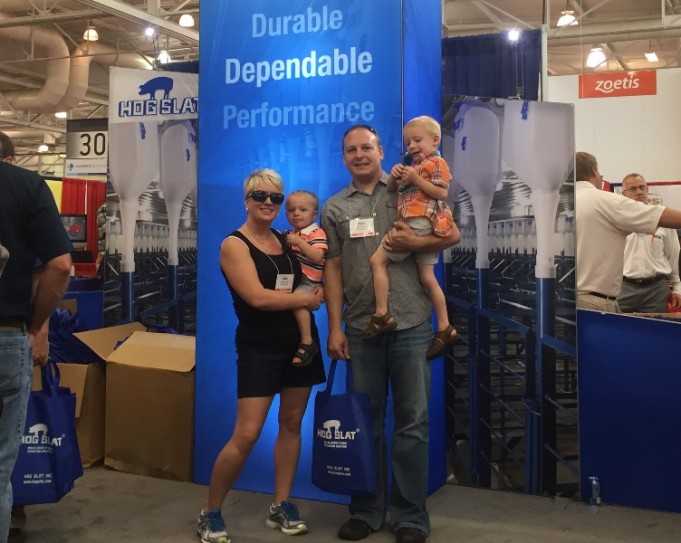 A southern Indiana family fighting a lawsuit against their permit request to build a swine finishing barn on the family farm has taken their message to the World Pork Expo in Des Moines, Iowa this week. Kyle and Leah Broshears of Seymour have gone the route of Go Fund Me on the internet to help cover large legal expenses, rather than just put aside their dream of a hog operation. Kyle told HAT they’re reaching out to ag and the public on principle.

“This is a common story that you will hear all over the country,” he said. “It’s not just us, it’s not just pork, but it seems like the opposition out there for agriculture today is getting louder and louder and there’s no accountability for the things that they say and the things that they do. I think that agriculture needs to stand up for itself and that’s kind of what we’re trying to do here. I think that we have a very good, positive message and if this country is going to see the future come down and be successful, then family farms like ours have got to be allowed to do their job.”

The Jackson County Plan Commission and then the Board of Zoning Appeals both granted unanimous approval for the 2014 permit application, but then suits were filed against the Broshears, the BZA, and all the members of the BZA. Since the county won’t spend what’s necessary to defend its decisions, it has fallen to the Broshears to legally defend themselves.

“And it’s the same things that you’ve heard a hundred times before over and over again. They are alleging that ground water will be contaminated, that there will be surface water runoff that will be contaminated, that there will be harmful and nauseous odors coming from the facility, truck traffic, the same kinds of arguments you would expect in any other case. It’s unfortunately now our job to spend the money in court proving otherwise.”

Broshears has been told that could run up to $125,000. So the online portal to raise those funds was built, and through donations ranging from $20 to $5,000 over $21,000 has been raised. Anyone can donate at the link for the Go Fund Me “Save our Bacon” site.

The first evidentiary hearing is set for mid July and Broshears explains more about it in the full HAT interview: Kyle Broshears