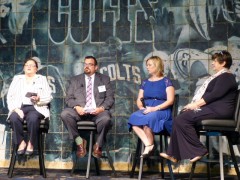 Last year it was property tax relief for farmers. This year the policy priorities of Indiana’s major farm organizations are different.  At last week’s Indiana Policy Summit, leaders of Indiana Farm Bureau, Indiana Pork, and Indiana’s corn and soybean organizations outlined their legislative priorities for the coming year. All three agreed that finding a long term funding fix for the repair of Indiana roads and bridges is the top priority for the upcoming session of the Indiana General Assembly, which will be a budget session.

With a projected surplus in the state coffers, Katrina Hall, with Indiana Farm Bureau, said they will be watching closely to make sure programs important to Indiana farmers get funded properly, “We will be watching closely to make sure the funding goes to areas that farmers are interested in like education, the budget for the Board of Animal Health, and the State Department of Agriculture.”

Jane Stevens, with Indiana Corn and the Indiana Soybean Alliance, said their main focus will be expanding markets in Indiana for corn and soybeans, “Our legislative priorities generally center around how do you get corn and soybeans to the livestock and biofuels industry.”

Josh Trinary, with Indiana Pork, said the livestock sector will be pushing for science-based and reasonable regulations, “Our producers have to plan on how they are going to be regulated. And that means they need to know under what parameters can they be regulated.” A measure that would have prevented the state or local communities from imposing more stringent regulations than the federal government died in the legislature last year.

All the groups also supported increased funding for expanded broadband coverage in Indiana.  Hall said, with the victory the agricultural community achieved last session in property tax relief, she did not expect further tax reform would be an issue that they would pursue for quite a while.