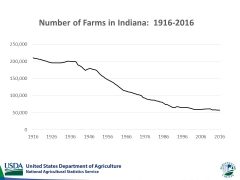 Greg Matli is the State Statistician of the USDA, NASS, Indiana Field Office. He says it’s no surprise what has been happening with farm ownership. 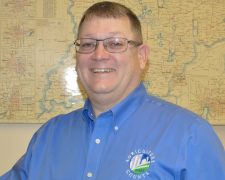 “We’re still continuing to see the number of farms decreasing even though it is at a slower rate than what it used to be, and the average size farm is still increasing, so farms are getting bigger.”

He adds there have been occasional exceptions, but almost every year for a century the number of farms has declined from the previous year.

The number of farms in the United States in 2016 was 2.06 million, down 8,000 farms from 2015. Matli says the Indiana drop last year is fairly consistent with recent losses.

The average size farm in Indiana was 256 acres per farm, up 1 acre from 2015. Matli says the one acre annual increase is typical that last five years. The national average farm size in 2016 was 442 acres, up 1 acre from the previous year.

NASS describes a farm as having at least $1,000 in annual sales: A farm is defined as any establishment from which $1,000 or more of agricultural products were produced and sold, or normally would have been sold during the year. The $1,000 threshold can be met by any combination of sales and government payments. Land in farms includes: crop and livestock acreage, wasteland, woodland, pasture, land in summer fallow, idle cropland, land enrolled in the Conservation Reserve Program, and other set-aside or commodity acreage programs.