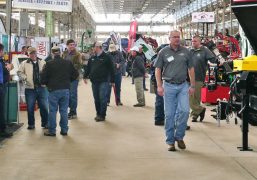 Hoosier Ag Today, Indiana’s premier agricultural radio network, and Farm World, one of the oldest and largest weekly farm newspapers in the Eastern Corn Belt, have jointly purchased the Indiana-Illinois Farm and Outdoor Power Equipment Show from Richard Sherman, who has operated the show the past 39 years. The show will be held December 11 – 13, 2018 at the Indiana State Fairgrounds.

Sherman announced in March that he no longer intended to operate the show. “When Farm World newspaper and Hoosier Ag Today heard about this decision, we were both disappointed,” said Gary Thoe, President of Farm World. “We felt the show was an important marketplace for farmers, agricultural professionals, agricultural companies, and agricultural educators in Indiana and the surrounding states.”

“The show is a tradition that thousands of Indiana farmers and businesses count on, and we felt it was important to see that tradition continue,” said Gary Truitt, President of Hoosier Ag Today. “There is a lot of uncertainty right now about the farm economy, so we felt it was important to make a bold statement about the future of Indiana agriculture and the future of Indiana farm families. We believe the future of agriculture is strong and sustainable and that this show will help growers and their suppliers to be productive and profitable in that future.”

That future will be driven in large part by technology and innovation. Thus, the show will focus a great deal on new technology and product innovation in farm equipment, seed genetics, precision agriculture, bio-science, robotics, sensors, big data, artificial intelligence, and more. “This is not a gathering of geeks, but a practical showcase of the latest technology and innovation that farmers can take home and put to work in their operations,” said Truitt. To reflect this, the name of the show has been changed to The Indiana Farm Equipment and Technology Expo. The show will be interactive, with daily live demonstrations of new products and technology as well as an expanded series of educational seminars. One tradition will not change, however, admission to the show is free.

Toni Hodson of Farm World has been designated Show Manager and will work with exhibitors to help them secure the best locations in what is expected to be a sold-out show. For details on exhibit space, contact 1-800-876-5133, ext. 280 or thodson@farmworldonline.com.

The combined media resources of Hoosier Ag Today and Farm World will be used to promote the event across the Eastern Corn Belt. A wide variety of Indiana farm organizations have been invited to participate in the event. A special show website that will keep farmers and exhibitors updated on the latest developments surrounding the show will be launched soon.