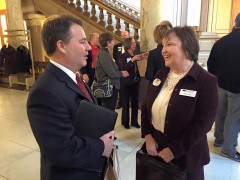 Indiana farmers lobbying at the Statehouse is not unusual, but this week a group of farm women held a different kind of event for lawmakers. It was called Legislator Appreciation Day, and farm women from across the state descended on the state Capitol. “These were women who are actively involved in their farming operations or in their community,” stated Ashley Beasley with Indiana Farm Bureau. 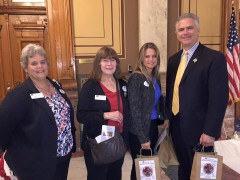 She told HAT the women came to talk with legislators about their farms and the issues that they care deeply about, “Things like property taxes and food safety.” In addition to talking, the woman were handing out pieces of pie. “It was the state pie, the Indiana Sugar Cream pie,” according to Beasley. For those lawmakers who could not stop and get their pie, the women then delivered the pie along with an infographic showing Farm Bureau legislative priorities to the offices of their elected officials. 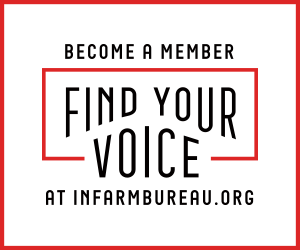 Beasley said they plan to make this an annual event, in part because it brought a lot of women to the Statehouse who had never been involved in anything like this before, “We have women of all ages and even a few FFA students.”