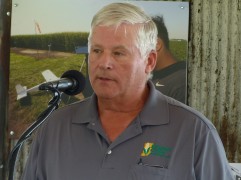 The EPA claimed that an increased goal for cellulosic ethanol production was not achievable. Gottbrath says this is simply not the case, “Cellulosic ethanol is relatively new but has shown growth and needs some assurance of demand in order to get more investors.” Several major ethanol producers have invested millions of dollars in research, and several cellulosic plants have been built and are producing fuel ethanol from products other than corn. “Let’s set a goal and see if we can meet it,” said Gottbrath.

Brent Erickson, executive vice president of the Industrial & Environmental Section of the Biotechnology Innovation Organization, said that the EPA’s past delays in RFS rulemaking and disastrous methodology flip-flops, which have now been struck down by the courts, have undercut billions of dollars of investment and hindered the production of advanced biofuels. “The major hold up is EPA’s unwieldly approval process,” he said, adding the agency should do everything it can—including changing the efficient producer application process—to allow fast-track approval of bolt-on technology to give these companies a better chance of beginning production in 2017 or 2018.

Kim Reynolds, Governor of Iowa, also testified at the hearing and called for higher levels for the cellulosic sector, “I urge the EPA to raise the advanced biofuel, biodiesel and cellulosic volumes. The RFS is a bold policy, and Iowans and the industry as a whole have always risen to the challenge.”
He told HAT the oil lobby was also at the hearing testifying against the RFS and he urged farmers to speak up in support of the ethanol industry, “It is really important to Indiana farmers and we told the EPA we need to keep the RFS and keep the cellulosic levels high and grow this industry.”

Indiana Soybean Alliance Chairman, Tom Griffiths also testified, “We believe that the Renewable Volume Obligations set by the EPA should spur the industry to grow instead of maintaining the status quo,” says Griffiths, who farms in Kendallville, IN. “The biodiesel industry is more than capable of fulfilling its responsibility to the volume obligations, and there are countless opportunities for the industry to grow, benefitting the economy and reducing our nation’s dependence on foreign oil. If the EPA fails to adjust the 2018 RVO, they will miss a strategic opportunity to push this burgeoning industry to growth.”

Griffiths, who testified on behalf of ISA’s Membership and Policy Committee, highlighted the additional stability and profitability to his farm thanks to the RFS and its positive impact on the Soy Biodiesel industry. He urged the EPA to ramp up its proposed volumes for advanced biofuels like biodiesel and to levels closer to those laid out in law by Congress.

EPA administrator Scott Pruitt will get a first-hand look at Indiana corn when he visits the state later today. Pruitt will be meeting with Governor Holcomb and top Indiana farm leaders. The purpose of the visit is to discuss WOTUS regulations.