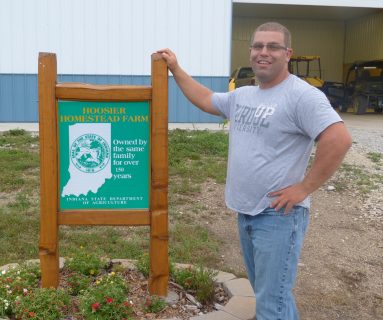 It’s been a confluence of events that have driven prices down over $2 in beans the last two months and corn down nearly $0.75 in the last 3 months. The trade war with China, no eminent weather threats, and a projected record yield for both corn and soybeans are all factors.

Ryan Rippy farms in multiple counties in North Central Indiana. He was featured in a Washington Post story in April regarding the Trump tariffs. He’s keeping a close eye on what is happening on a global level. When asked if this trade war is impacting decisions now on the farm, Rippy said, “It’s going to hurt this year but moving forward next year probably even more so. There were opportunities to lock in higher prices earlier in the year, so a lot of guys took advantage of that. It’s definitely going to affect the decisions moving forward. The equipment purchases, land purchases. It’s going to affect a lot of things.”

Rippy expressed to HAT the same sentiment many other farmers have, that he would prefer more trade avenues for the ag industry as opposed to a government handout.

As far as what’s going on in the field, Rippy says they’re seeing some disease in the corn but nothing too concerning. Rippy says that in a proactive effort, “We just finished spraying fungicide this week on the corn. We’re doing a little spot spraying on beans to clean up some problem areas. Beyond that we’re emptying out grain bins and getting ready for harvest.”

Many say it will likely be an early harvest this year and Rippy agrees.

“I foresee probably after Labor Day that we’ll be in harvest in earnest.”