For the past year, Indiana farmers have been encouraged to find their voice and speak up about agriculture. With the Indiana General Assembly in session and Congress about to write a new Farm Bill in Washington, this is a critical time for farmers to speak up about the issues that are important to them. A record large crowed attending the Indiana Farm Bureau legislative kickoff on Wednesday at the statehouse is proof that more and more are doing just that. “We have been strongly encouraging farmers to find their voice,” said Randy Kron, President Indiana Farm Bureau. “Once they see that they can make a difference, they get excited and invite their neighbors to also get involved.”

Kron told HAT there are very few farmers in the state legislature anymore, so most lawmakers need to be educated about important issues like broadband, taxes, and livestock. “Legislators want to hear from farmers,” he said. “They are their constituents. If agriculture is going to have a say in this session of the legislature, we are going to have to be at the table and we are going to have to speak up.” At the legislative kickoff, farmers from around the state had lunch with lawmakers and discussed policy priorities for the upcoming session. 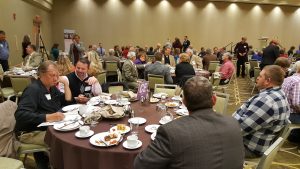 Indiana Farm Bureau has set a goal of having every member of the state legislature spend time on a farm by the end of this year. So far 50 lawmakers have spent time on an Indiana farm. IFB hope to have at least 6 farmers from each county make a visit to the Statehouse this session.