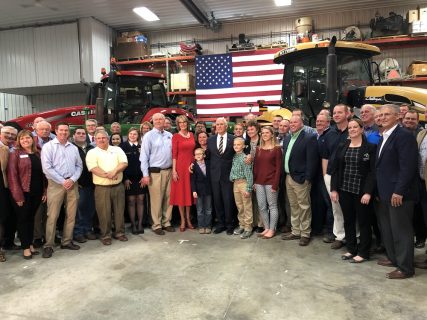 It was anything but a typical day at Lamb Farms in Boone County when the Vice President and a gaggle of media showed up for a visit. “I told the President I was going home to Indiana to listen to farmers,” Vice President Mike Pence told the group of about 50 Hoosier farmers who gathered for the event. True to his word, Pence did more listening than talking during the 90 minute event.

The message the former Indiana Governor heard was loud and clear: pass USMCA, remove the tariffs, strike a deal with China, and get the farm economy back on track. The listening sessions were emceed by Indiana Farm Bureau President Randy Kron who told HAT Pence got the message, “I think he heard the message that agriculture needs the USMCA. We have got to get this done.”

In his closing remarks, the Vice President said the President is committed to getting the deal ratified by Congress this spring, ”President Trump has done his job it is time for Congress to do theirs.” Kron said Farm Bureau has made adoption of USMCA by Congress its top legislative priority this spring. 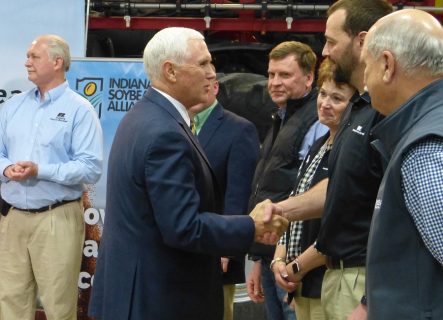 Many of the farmers in attendance also stressed their concerns over the state of the farm economy which has resulted in continued financial losses for many producers. Jeff Demerly, from Wolcott, told Pence, “I know of some young farmers who will not be able to start their tractors this spring because they just don’t have the money to farm.” Mike Beard, a corn grower from Clinton County, told HAT that farmers are beginning to lose patience with the lack of progress on trade and continued low crop prices.

Livestock producers also pressed the Vice President for quick action on a number of trade fronts. With 1 out of every 4 pigs raised in Indiana going for export, free and open trade is vital to the pork industry. “I hear you” was the most frequent response from Pence.  His willingness to listen and the fact that he came to a farm to listen impressed many those in attendance and gave them a measure of confidence that their concerns were heard. Urgency and need for action were strong sentiments in the room of mostly Trump supporters, but continued stagnation on trade issues may change their feelings as time goes by.