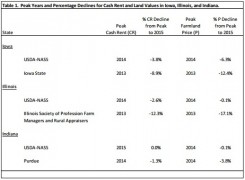 The new 2016 Purdue Farmland Value Survey is now public, and the survey confirms that Indiana farmland values continue their downward trend. The average declines are 8.2 to 8.7 percent depending on land quality, and declines of this size haven’t been seen since the mid-1980s.

Purdue agricultural economists Craig Dobbins and Kim Cook are the report authors and Dobbins told HAT it’s obvious what has values in retreat.

The average farmland value has fallen about 13 percent over the last 2 years. The drop follows several years of spikes in the prices paid for farmland.

“Yes, there was probably some over-optimism that was in the market,” Dobbins says, “and now maybe we’re on the other side and of that and there’s over-pessimism in the market.”

The downward change in farmland values was consistent across the five regions of the state, although the North region had the largest year-to-year drop, with declines of 14.2 percent, 10.7 percent and 10.2 percent for top, average and poor farmland, respectively. The authors noted that declines of at least 10 percent are rare.

“In addition, the farmland value change in this region did not support the conventional wisdom of top-quality land maintaining its value better than lower-quality farmland in a downturn,” they wrote.

This year’s decline in cash rents across all land qualities was the largest since 1987. Over the past year, cash rents declined by an average of 9.8 percent to 10.9 percent. Top land had an average cash rent of $257 per acre, average land $204 per acre and poor land $157 per acre.

The survey respondents indicated that they believe there will be a continuation of low grain prices, low and stable long-term interest rates and low inflation rates. If they prove to be correct, the authors said there is likely to be slower growth in farmland earnings and that producers’ per-unit cost of production would need to be lowered further.

“Lowering per-unit cost of production will take time and will likely be a combination of adjustments in lower input costs, higher yields, and lower cash rents and farmland values, each contributing a small change,” they wrote.

Respondents expected farmland values to fall an additional 1.9 percent to 2.2 percent during the last half of 2016,

Long-term, the direction is less clear.

“Respondents were divided just about equally across higher, no change and lower,” the authors said.

When asked to project cash rents for 2017, respondents expected a further decline of 4.5 percent.

The annual Purdue Farmland Value Survey is based on responses from rural appraisers, commercial bank and Farm Credit Mid-America agricultural loan officers, Farm Service Agency personnel, farm managers and farmers. The results provide information about the general level and trend in farmland values and cash rents. The survey does not indicate specific values for an individual farm.

The full report is available at https://ag.purdue.edu/agecon/Pages/Purdue-Agricultural-Economics-Report.aspx.