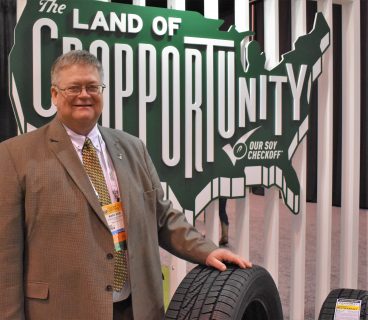 Indiana farmers who have traveled to the annual national commodity groups’ convention, this year in Anaheim right across from Disneyland, have the usual farming issues on their minds. But the flooding rains recently in Indiana are on their minds too. Some even cut the trip short to get back as the rising Ohio River wreaks havoc in the south.

Mark Seib is from Poseyville in southwest Indiana where it is wet.

“We came across the Ohio River this past Saturday and I have never seen the barge traffic as high up on that bridge as it is right now,” he told HAT midweek on the trade show floor of Commodity Classic. “I’ve got a good friend from the soybean association, a brother that is trying to get his machinery out of the way of the flood, and we’ve got more rain coming from what I understand. So, it is a concern and I just hope nobody gets hurt and there isn’t any damage.”

Seib said the only good to come from this flood is that the crops weren’t in the ground yet. Now they’ll try to get through until waters recede and they begin to see what debris is in the fields. He added southwest Indiana fields didn’t have enough moisture, but that’s all changed now.

“We were going into this winter with surface moisture being extremely short. Our lakes and ponds were half full, so we needed some moisture. Maybe we didn’t need it all at once and maybe we could have used a little of it this summer. You know a farmer is never happy with what is happening. He always wants to say it’s too much, it’s not enough, but we’re waiting to see what’s happened here.”

As a 6-year director on the United Soybean Board, the soy checkoff, Seib was working the USB booth at Commodity Classic.

“It amazes me every year that I see something, and I find something that the United soybean board has done to help the U.S. soybean farmer. It is just amazing what all that we are involved in and the scope and the projects. We try to make sure that we spend the money wisely and make sure we see it go as far as it can go by partnering with industry and partnering with universities and other associations as well to make sure that we get the biggest buck for the dollar that we have.”

Hear more about the #cropportunity benefits from USB work in the full HAT interview:Mark-Seib-for-USB